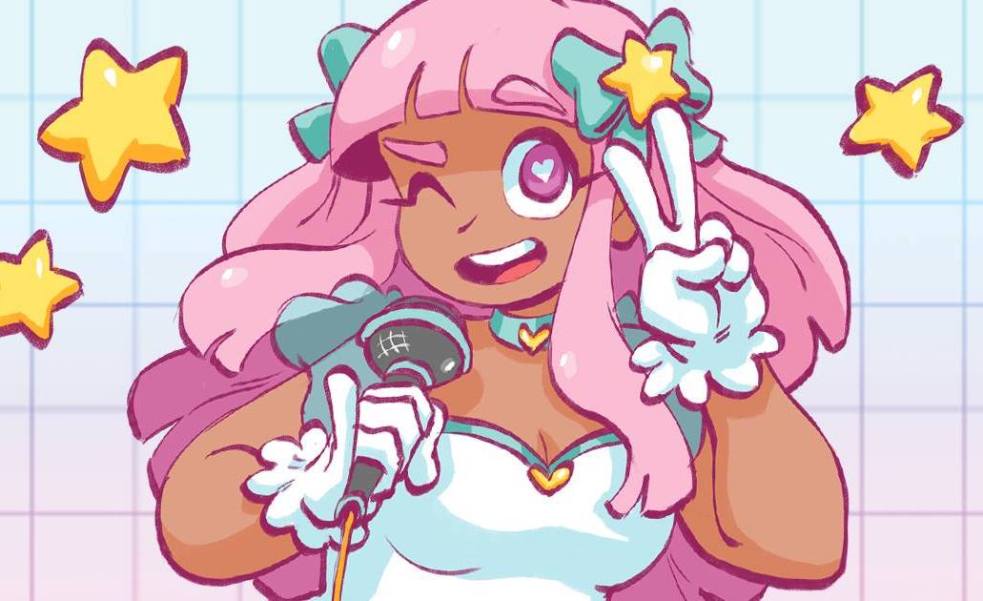 It’s hard to ignore the brightly-clothed, friendly-faced character that adorns Kira Kira Pop’s event artwork. The bubblegum idol has become the face of the recurring dance night’s brand for good reason; she reflects the high energy music found in the J-Pop and Idol culture their audience finds so addicting. (It’s not surprising to learn “Kira Kira” translates to “sparkling.”) Behind this colorful imagery are four co-producers Sam Harris, Joy LaFleur, Jason Rosa, and Cherry Wallflower. I met the four of them in the middle of Anime Festival Orlando to talk about the community they’ve fostered and the music they love. Enjoy.

matthew warhol: I wanted to start off with a super general question. If someone had never heard of Kira Kira Pop before, how would you describe it to them?

Cherry Wallflower: Sparkling dance party! And… inclusive. And… welcoming. And… colorful. And… safe, happy, good vibes. Some people hold themselves back from going to an event because they don’t have a friend they can go with, but we hope that when people come here, they feel like they can be friends with everyone.

matthew warhol: Were any of you doing stuff before, whether it be in music or putting on events?

Jason Rosa: Yeah, Sam and I used to do a J-Pop dance show together for a brief period of time. It doesn’t need to be brought up [laughs]. And there was a show called Play It Loud that turned into a label I run. I stopped doing shows for a while, and [Sam] said, “Hey, do this show!”

Sam Harris: I was really passionate about doing something to promote Japanese music and culture. I had DJed at the show that [Jason] was originally doing, but we were interested in coming up with a new concept. 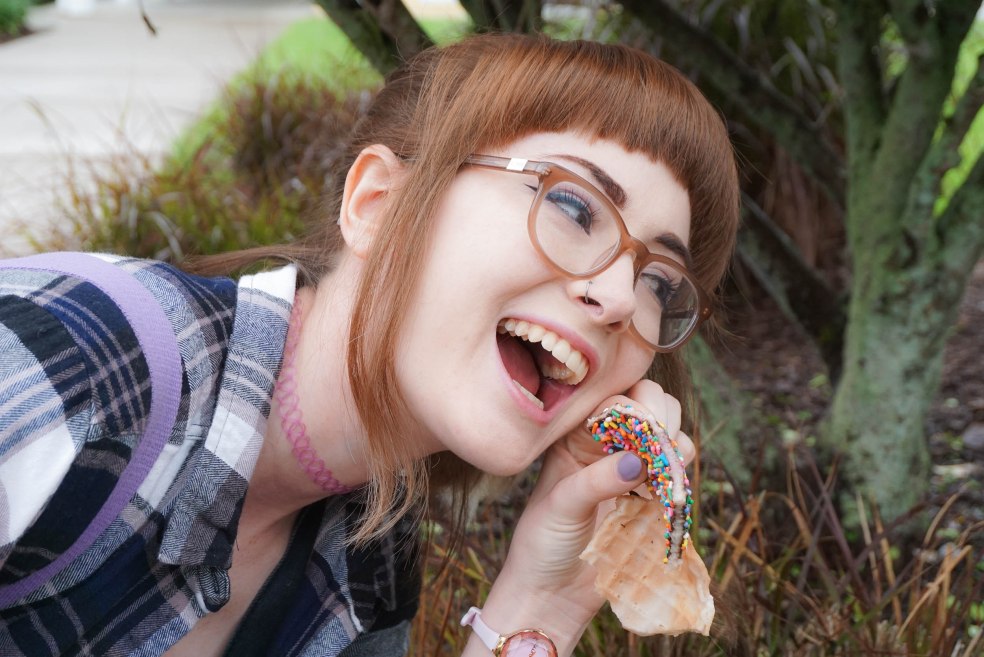 matthew warhol: Is that where Kira Kira Pop started?

matthew warhol: How did everyone else come together?

Jason Rosa: I knew [Cherry] from the old show at Bikkuri that she actually performed at.

Cherry Wallflower: You were friends with the person that was in my group. It’s all so embarrassing.

Jason Rosa: This was all based on a good foundation of cringe.

matthew warhol: Kira Kira was to get away from cringe?

Sam Harris: Reborn out of the embers of cringe.

Joy LaFleur: It comes with the culture, though. You have to be cheesy enough to make fun of yourself.

matthew warhol: How did you get involved Joy?

Joy LaFleur: I had attended the shows and would hand out flyers for them and stuff like that. Then I was like, “Hey if you need some more help, I really love this event.”

matthew warhol: Really quick, let’s go down the line and tell me what you do for Kira Kira Pop.

Sam Harris: I guess we all consider ourselves co-producers, but I’m also considered the resident DJ.

matthew warhol: What is your DJ name?

matthew warhol: What do you DJ?

Jason Rosa: I’m the executive producer of the show, basically responsible for everything that goes on at the show. The booking decisions are between all of us, but the actual communicating with the artists happens between Sam and I. I bring a bunch of connections from the label.

Cherry Wallflower: Let’s see… I do a lot of the video commercials we put on.

Joy LaFleur: You do all the idol research.

Cherry Wallflower: One aspect of our show is idol, which is a type of J-Pop genre. How do I describe it? It’s primarily people dancing and singing bubblegum pop songs. We try to have at least two idol acts per show. I guess my role is making friends and inviting them to perform.

Joy LaFleur: I’m an associate producer. I do some odds-and-ends and day of stuff, some talking to artists and getting information.

matthew warhol: Have you found that Orlando has been accepting of you?

Jason Rosa: Orlando has changed a lot in the last few years, especially the people here. Maybe it’s just the area we’re in, but there’s more of a loving feeling, more of a community feel.

matthew warhol: Are you familiar with or have you seen people at your shows from Body Talk… or Jeff Marks—he does Hyperclub.

Joy LaFleur: Oh yeah, he’s a friend of ours!

matthew warhol: I love him. He got me into Nightcore and that’s probably how I found out about Kira Kira Pop.

Sam Harris: One of the first people who guided me with DJing was Phil Santos. When I first started, he showed me the ropes a little bit. 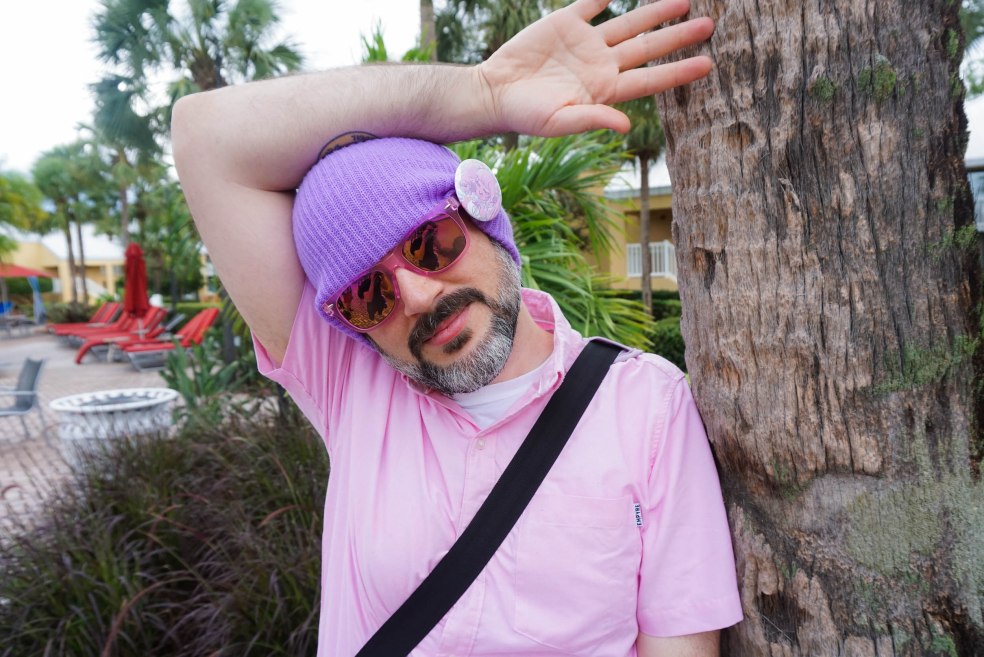 Jason Rosa: When we started the show, we had some stuff we wanted to do and didn’t know how the Orlando community would take it. On the first flyer, we had it listed as “safe space.” We wanted to lay it down like, “This is what it is. We want this to be a welcoming environment.” It’s kind of difficult when you’re marrying those ideas with like idol. Where it’s very poppy and pretty and we love parts of idol culture, it also comes from cultural backgrounds that aren’t screaming towards inclusivity.

Jason Rosa: You’re trying to make your own thing, hold up a bunch of things you’re passionate about, but not be appropriative at the same time, which is really, really difficult. Everything is nail-biting.

matthew warhol: That’s smart that you do that. If you didn’t you would be opening yourself up, and if you’re not handling it carefully, something bad could happen. Acceptance is important at shows in general, and I’ve been to Orlando shows where it doesn’t feel like that, and that’s not good for anybody.

Joy LaFleur: We are out to have a social agenda.

Jason Rosa: We have a very heavy social agenda that we keep well under wraps. We don’t market it.

Joy LaFleur: You feel it.

matthew warhol: [Cherry], you were talking about how a lot of people are afraid to go to shows alone and not feeling accepted.

Cherry Wallflower: A person posted on the event page like, “Oh, I really want to go but I don’t have anyone to go with.” Then, someone responded, “We’re all friends here. It’s fine!” It sounds super cheesy but it’s so important. It always feels warm and tingly.

matthew warhol: I think that’s a stigma a lot of people hold towards local music—especially when people are building their own things—that they take themselves too seriously. And there are people who do that in every city and every culture.

Jason Rosa: Most things are run by a promoter, and the promoter is just…

matthew warhol: An asshole. I’ll say it, an asshole. Not all, but I’d say that is unfortunately far too many people’s experience dealing with promoters.

Jason Rosa: I’m trying to not continue that narrative.

Sam Harris: Their goals are completely different from ours.

Cherry Wallflower: I like to think of this not as just an event, but as a community that is consistently building. Through Kira Kira Pop, people have made friends with each other, gotten into relationships with each other.

matthew warhol: Wait until you have a baby come out of it, a Kira Kira Pop baby. [laughs] Are there any guesses as to why you’ve had such great success so far?

Joy LaFleur: It’s because they feel safe and we create that family feeling so they want to come back. It’s not just people coming if they have work off. People make arrangements. People book hotels to come to this. People have flown from out of state because it’s an experience. The first show that I went to before I was a part of the team, I went with one friend that I knew. I didn’t know anyone else, but by the end of the night I was dancing with people and exchanging phone numbers and Facebook friend requests, making connections, making community. And I needed that so bad.

Sam Harris: The fact that you come out, makes you belong. You don’t have to do anything else.

matthew warhol: Another part of that, I think, is bringing people from out of state. It doesn’t feel like the same thing.

Cherry Wallflower: I also think it’s because we try to put on such an eclectic lineup. There are so many different types of people, you can’t really have cliques.

Joy LaFleur: Diversity, not only showcasing really cool artists that might not always get noticed, but also bringing people that the audience might relate to more.

Design by Bucket of Robots matthew warhol: That’s so important because at a lot of shows you only see one kind of person performing.

matthew warhol: Or I’ll go to shows and it’ll be all white people.

Jason Rosa: Every time we put together a KKP, we try to do everything we can to make sure that’s not the case. That has always been a the forefront of why we do this. Even the art, this isn’t going to be an anime who’s a traditional pale-skinned character.

matthew warhol: The last thing I wanted to make sure we talked about was… on Facebook we were talking about doing the interview at the convention—we haven’t even mentioned we’re at an anime convention—but you said that this culture inspires you, but you wanted it to be clear that you’re separate from it.

matthew warhol: You don’t want to limit your audience—that’s what I got.

Joy LaFleur: A lot of people that attend KKP go to anime conventions, but they’re not all from the conventions. 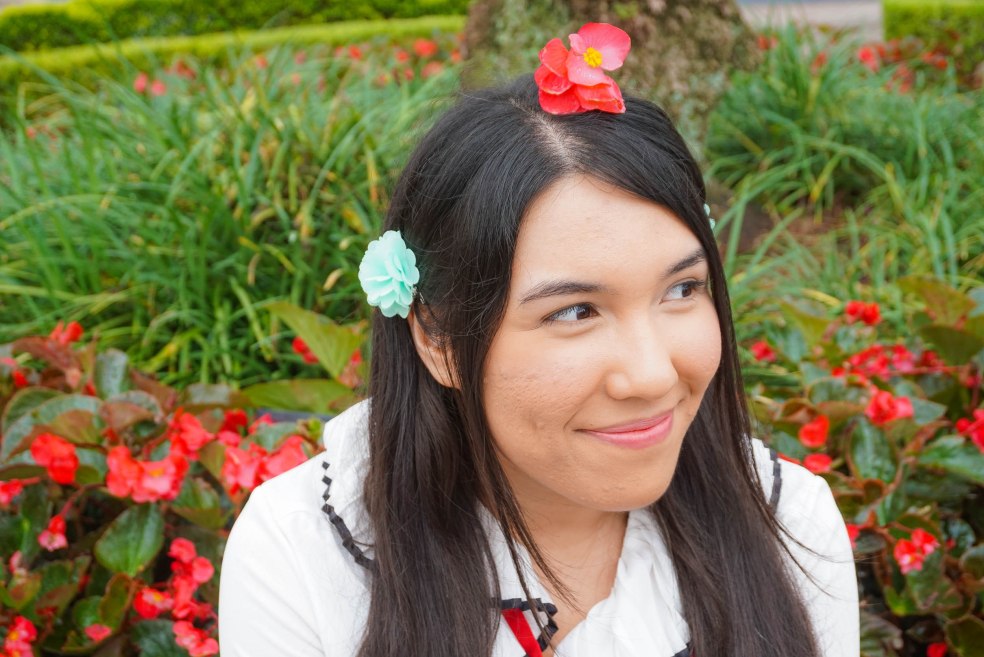 Cherry Wallflower: They care more about money than anything. It’s understandable, business-wise.

Jason Rosa: I’m the oldest person here, and I know they used to be more community-based. What we’ve made is more like that community.

Cherry Wallflower: Before, conventions were more fan meet-ups. Then they grew and people are seeing that the can capitalize on it. They can use imagery that to bring people in. When people see Kira Kira Pop, they see an “anime girl” so they associate with cons, but we don’t want to limit ourselves.

Jason Rosa: We want all these people to meet and realize they have common ground.

Sam Harris: I think that what we have most in common with cons is our the fans’ passion for the culture, the music, bringing people together.

Cherry Wallflower: Once you become a regular at cons, you start to notice the skeevy things that happen. I wouldn’t say it’s accepted, but it’s common knowledge that there are predators that go after underage girls.

Joy LaFleur: We have zero tolerance.

Jason Rosa: We have people that host the show, oftentimes the maid cafe—shout out to Cafe Peko Peko. But when one of us takes the microphone, it’s kind of a break of the illusion of the night. When we do that we talk about what’s coming up, but also important things like people being safe and treated fairly and equally, and behaviors that are unacceptable. And you don’t have that at most shows. And it’s important to note that the venue has been incredibly supportive of that.