Do you have twenty something music lover who is hard to buy for? Buy him/her vinyl! Vinyl is back in a big way, and more and more vinyl junkies are showing up at Record Store Day to get exclusive releases. Back to Black Friday is celebration of the local record store and the biggest shopping day of the year. Enjoy.

Usually Black Friday is a day about corporate greed and punching out moms at a Toys R Us for the last Super Deluxe Elmo with Detachable Combat Knife. If you’re tired of all that, stick it to “The Man” at Back to Black Friday. Over 1000 independently owned record stores participate in Record Store Day exclusives, and for a ton of these releases, Black Friday is going to be the only day you can get them. Sure, you could find a guy on Craigslist, drive two hours, meet him in his shady condo/meth lab, and possibly be sold into a prostitution ring, or you could just get up early on Black Friday, drive down to your local record store, and purchase the finest exclusive releases money can buy, while telling big corporate America to suck it. Enough talk, let’s get to the releases.

This is barely scratching the surface, the whole list can be viewed at here, or you can view it as a detailed PDF.

In the early 90’s, a little band named Nirvana turned the music world upside down with their iconic album, Nevermind. Two years later, the biggest band in the world released In Utero, that album today turns twenty. With  singles like, “Heart-Shaped Box” and “All Apologies” the band continued to gain popularity until Kurt Cobain’s 1994 death. Today, I’m here to tell you about the In Utero anniversary box set and some of my opinions on the album.

“All Apologies” for that rape comment, Nirvana puns are my favorite.

If you have $150 laying around, or you’re a huge Nirvana fan, you might want to get the Super Deluxe Box Set that includes: 70 remastered, remixed, rare, and unreleased tracks, the “Live and Loud” performance DVD, a poster, and a booklet. I think that’s a little steep, especially because remastered tracks never sound as good as the original recordings. They are offering a 3 LP Edition, for $60, but I think I’ll stick to my original pressing. The best part about the reissued goodies, is that west coast tattoo parlors are offering free Nirvana tattoos today, with purchase of any of the 20th anniversary merchandise. The participating parlors are: Fingerprints in Long Beach, California; Looney Tunes in West Babylon, New York; and Silver Platters in Nirvana’s hometown. 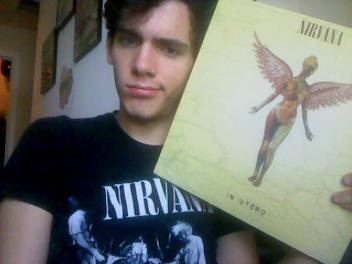 You can order any or all of the 20th anniversary In Utero stuff from the Nirvana store.

Also, if you’re interested in vintage Nirvana merch, check out Spin’s gallery of Schwag From the Band’s Last Year.

The Music of In Utero

Record label’s attempt to make money off of classic music is fine and all, but more importantly, is the music Nirvana made. Personally, my favorite tracks from In Utero are, “Rape Me” and “Pennyroyal Tea”. In Utero was the first, and the last, Nirvana record after they exploded, and “Rape Me” describes Kurt’s feelings towards their record label and the media. I always thought the riff was a rip of “Smells Like Teen Spirit”, which is the perfect middle finger to the record execs. “Pennyroyal Tea” is a heart-breaking song about drinking tea that causes abortion. What’s not to love?